We provided gearbox services all over the world. As our headquarters are located in The Netherlands in Europe, we do a lot of gearbox related project in this region. Listed below are a selection of projects we have done in the past. By clicking on one of the links, you can read more details and view pictures of our work.

Projects in progress NOW
Update 22-5-2014
The list below shows a selection of the projects we have done, except projects in The Netherlands and Belgium, sorted by country:

Repairing of Rhenania AWNG-45-50S gearbox
- All piping and electric connections were removed.
- Hydraulic pump for the rudder control was removed.
- The input shaft coupling was disconnected from the main engine.
RHENANIA AWNG 45/50S

France
January 2014
Inspection and revision on a Valmet K-80F gearbox
The follow instructions were produced at the gearbox:
VALMET K-80F

France
January 2014
Inspection and revision on a Renk gearbox
Revisionconstruction and supply comprehensive:
- Disassembling and cleaning of the gearbox.
- Inspection of all parts of the gearbox:

- A visual inspection of the gearbox casing for bursts.

During inspection not, all bearings and gears could be inspected.

Small leakages were observed around the gearbox at the seals and on the OD-box.

The generator shaft bearings show wear, scratches and small indentations. The conditions of these bearings can be considered as non-acceptable.

Small steel particles were observed in the filter elements.

During the last oil sample there was found water inside the oil of the gearbox. Water in the oil can reduce the lifetime of the bearings and the gears. 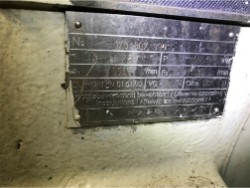 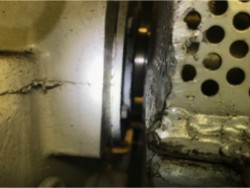 Germany
January 2014
Inspection and repair of gearbox of brand CHONGQING
Inspection performed on the propulsion gearboxes of the NST xxxx. The Chief Engineer observed high temperatures near the input shaft bearing (motor side) of the starboard side gearbox.
CHONGQING GWS4245 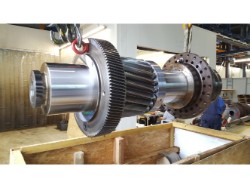 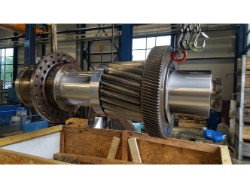 Lithuania
April 2013
Inspection and revision on gearbox Reintjes Waf 561
Our client in Lithuania had problems with the gearbox of the ship.
Engineers immediately disassembled and inspected.
After inspection and repair, the parts were send back to Lithuania.
The gearbox was assembled there again.
REINTJES WAF 561

We performed inspections onboard a vessel. Location, Chennai, India 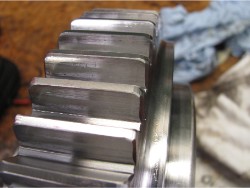 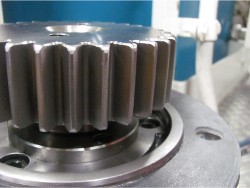 This client from Norway came to us with this RENK SHH 11 1135,1/760. We inspected the gearbox and performed a repair. After a succesful testrun we shipped the gearbox back to the client.

Upon arrival on the vessel in Rotterdam, preparations were made to disassemble the gearbox. Only upon arrival at anchorage in Scheveningen the disassembly could be started.

The gearbox showed no signs of serious damage or wear, beside normal wear on bearings and impact marks on the gears, from running without load. The intermediate shaft driven-end bearing however was found heavily damaged, most likely caused by slipping of the rollers/bearing.

GBS was invited to perform the below mentioned activities on board a vessel: 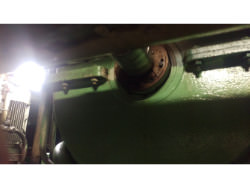 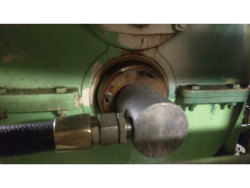 Norway
February 2016
Revision on gearbox Hansen RLC-23-S
- Disassembling, cleaning and inspection of the gearbox.
- Performing of the repair constructions.
- Deploying of the inspection report.
HANSEN RLC-23-S

Norway
December 2013
Inspection after strange noise
- Disassembling, cleaning and inspection of the gearbox.
- Performing of the repair constructions.
- Deploying of the inspection report.
- Renewing of all seals, bearings and innerrings.
LOHMANN & STOLTERFOHT GVL 375 A

This page provides an overview of the inspection a ZOLLERN planetary winch gearbox.

The gearbox was sent to the GBS International workshop to carry out the inspection. All findings are listed here.

The working parts of the gearbox are in good condition, gears and shafts can be re-used, as well as the planetary gear bearings. Other bearings should be replaced.
ZOLLERN ZHP 4.25 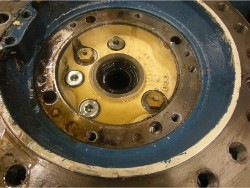 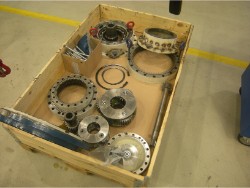