We performed an inspection and repair on a gearbox CONRAD STORK RB 450/3H.


This client from THE NETHERLANDS came to us with this CONRAD STORK RB 450/3H. We inspected the gearbox and performed a repair. After a succesful testrun we shipped the gearbox back to the client.

The condition of the sand pump gearbox can be considered as good. The gears are in good condition and no major bearing damage has been observed.

The input shaft DE bearing shows the most wear, indentations are visible in the raceway and the surface has a grey and dull appearance. This is an indication for pitting of the hardened surface layer. However, the damage is has not yet reached a progressed state, there is no need for immediate action.

On some of the bearings scratches have been observed which could originate from hard particles entering the gearbox (The damage on the input shaft DE bearing could originate from sand). The most likely place for sand to enter the gearbox would be via the breather cap. This breather cap is an old model without filter, therefore foreign particles have no barrier which keeps them from contaminating the oil.

Overload and overheating situations can affect the plates in various ways which are hard to detect through a small inspection hole. The friction coupling assembly appeared to be in good state. It was not possible to closely inspect the intermediate plates for damage, however no wear particles where observed in the filter. The amount of material on the brass sintered plates should be compared to the manual of the coupling manufacturer to determine if they are in need of replacement.

Recommendations are:
- To install a breather cap with filter to prevent foreign particles from entering the gearbox
- To adjust the oil level in the gearbox according to the marks on the dipstick
- To establish a schedule of yearly visual inspections. 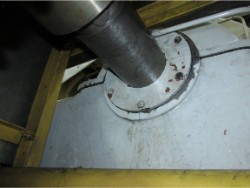 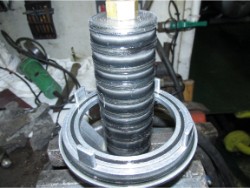 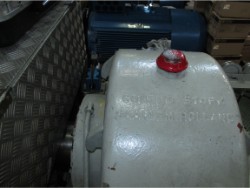 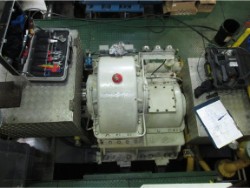 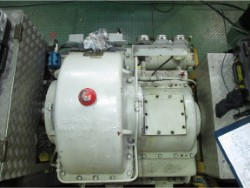