We performed an inspection and repair on a gearbox REXROTH GPV442.4.


This client from The Netherlands came to us with this REXROTH GPV442.4. We inspected the gearbox and performed a repair. After a succesful testrun we shipped the gearbox back to the client.

This report presents the results of the visual inspection and vibration measurement on the Gingelom GSG06 wind turbine. The client invited GBS to perform an inspection to document the condition of the gearbox. Furthermore, reports from the online SKF vibration monitoring system will be compared to data captured by a mobile vibration data collector.

The condition of the gearbox can be considered as unacceptable, during the visual inspection degradation of the outer ring of the LSS RS bearing has been observed as well as indentations on the ring gear teeth. This is in line with the findings of the last oil analysis (wind turbine 207238, sample number 3443503, OELCHECK report), higher iron wear particle values and lower viscosity causing a thinner oil film and more metal to metal contact.

During vibration measurement wind speed was very low making detection of failure modes in the slow rotating planetary system difficult if not impossible. Lacking a full visual inspection an accurate identification of the active wear source was not possible. However it can be stated that there is damage to at least one bearing (LSS RS) in the slower rotating part of the gearbox.

The damage to the bearing has already caused secondary damage in the form of indentations in the ring gear and planetary gears. The damage to the gears at this stage is not severe, if degradation of the bearings continues bearing clearance could increase causing incorrect gearmesh, local overloading of the teeth and finally teeth breakage.

When comparing the measurement data to the CMS alarm reports it can be stated that channel 14 sensor (GnNDe) is indeed not functioning correctly or improperly mounted. None of the faults mentioned in the CMS alarm reports have been observed in data collected by the mobile system. Because no further CMS data was provided it was not possible to do a complete analysis and comparison of the system.

Recommendations are:
-To perform an in-depth visual inspection of the planetary section of the gearbox in a wind situation that will allow manual pitching of the blades

- To check the lubrication oil type and replace as stated in the last oil analysis report. 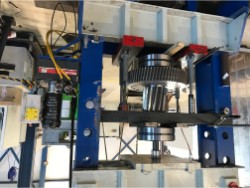 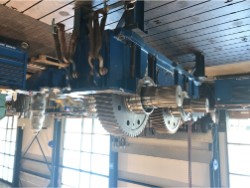 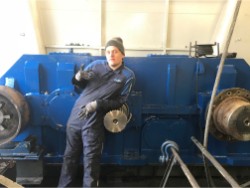 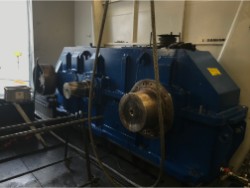