We performed an inspection and repair on a gearbox Jahnel Kestermann DP-ASU710.

Before disassembly a blue check was perform, showing a proper contact pattern of the gears. The previously applied layer of red lacquer on the teeth of the gearwheel, was evenly worn all around the gearwheel, confirming the findings of the blue-check.

Disassembly of the gearbox went without further difficulties. Bearing pockets were measured after and sizes were all within the acceptable tolerances. The shafts were then packed in wooded boxes in order to prevent damage during transport.

During disassembly of the shaft in the workshop, no further complications were found. Upon visual inspection and measurement, none of the parts showed signs of damage or wear. An Non-destructive magnetic tests, showed no cracks in the gears. The shafts were generally in acceptable condition. New parts were fitted to the shafts before being prepared for transport back to the vessel.

Reassembly of the gearbox onboard went without any difficulties. However, the axial clearance of the input-shaft tapered roller-bearing set, was too small according to the gearbox manufacturers specification. The bearing spacer was therefore removed and modified in the GBS International workshop, in order to obtain the correct clearance.

- Flush the gearbox from any debris that might have got inside during assembly, by running the oil pump for few hours, before operation.
- Monitor SPM and temperature values during start-up and operation, and check if within an acceptable range.
- Check the alignment of the motor to the gearbox.
- Conduct an annual oil-sample analysis of the gearbox lubrication oil. 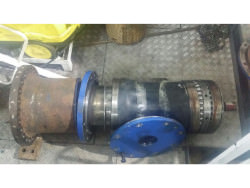 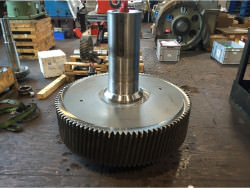