We performed an inspection and repair on a gearbox REXROTH GPV442.4.


This client from The Netherlands came to us with this REXROTH GPV442.4. We inspected the gearbox and performed a repair. After a succesful testrun we shipped the gearbox back to the client.

This report presents the results of the visual inspection and vibration measurement on the Wuustwezel WUW02. The client invited GBS to perform an inspection to document the condition of the gearbox. Furthermore, reports from the online SKF vibration monitoring system will be compared to data captured by a mobile vibration data collector.

The condition of the gearbox can be considered as good, during the visual inspection no failure modes have been observed and during the vibration measurement no defect frequencies have been detected. However, measurements on the generator FE show clear indications of bearing damage.

When comparing the measurement data to the CMS alarm reports it can be stated that sensors 6 and 7 are indeed not functioning correctly or improperly mounted. None of the faults mentioned in the CMS alarm reports have been observed in data collected by the mobile system. Because no further CMS data was provided it was not possible to do a complete analysis and comparison of the system.

The signals measured on the FE of the generator show clear indications of bearing damage. Both impacting in the TWF, characteristic peaks in the envelope spectrum and high frequency noise in the acceleration spectrum. It can be concluded that something is not as it should be in this bearing, most likely a fault in the outer race. Part of the observations can be attributed to a lack of lubrication but it is very unlikely that only greasing the bearing will solve this problem.

Recommendations are:
- To perform an in-depth inspection of the FE bearing of the generator by additional vibration measurements (after checking the grease supply to the bearing)
- To perform annual visual inspections and oil analyses. 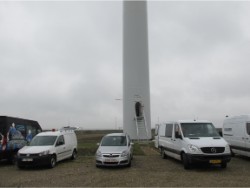 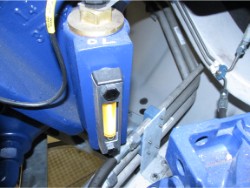 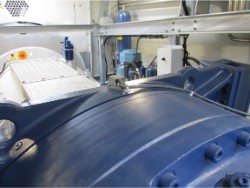 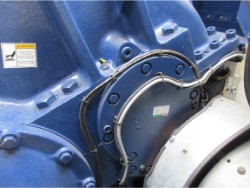